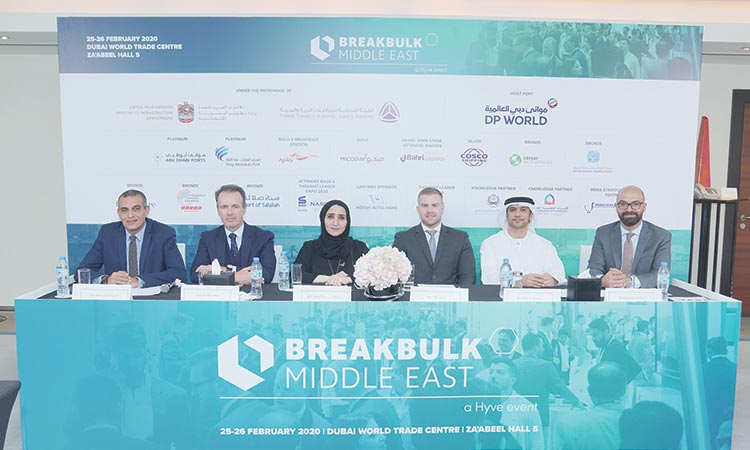 Top officials during the press conference in Dubai on Wednesday.

The UAE’s most notable industry leaders have announced the upcoming Breakbulk Middle East, the leading GCC event for the project cargo and breakbulk sector, in Dubai on Wednesday.

BBME’s commitment to advancing the industry, while simultaneously providing visitors and exhibitors with the best possible experience, has seen the event grow consistently since its inception.

Breakbulk Middle East is set to take place on  Feb.25 and 26 at the Dubai World Trade Centre in Dubai and the event is hosted by DP World-UAE Region for the second consecutive year.

The two-day conference is once again being held under the patronage of  Dr Abdullah Belhaif Al Nuaimi, the UAE Minister of Infrastructure Development and the Chairman of the Federal Transport Authority for Land and Maritime.

Eng. Ahmed Al Khouri, Director-General of the UAE Federal Transport Authority – Land and Maritime (FTA) emphasized, “We are living in the dawn of a new decade, and there is a strong sense of optimism that this year will be one of great transformation for the UAE. As a result, we are confident that 2020 only marks the beginning of what will surely translate to unprecedented growth for both our country and the entire Middle East.

“With Expo 2020 set to take place near the end of this year, the world will see Dubai, and the rest of the UAE, in a light which it has never been acquainted with before. As we look forward to this date, Breakbulk Middle East will serve as one of various contributing forces that help in realizing of our aspirations.”

Ben Blamire, Commercial Director at Breakbulk Middle East told Gulf Today that he is optimistic that the breakbulk and project cargo sector for shippers is moving on an upwards trajectory.

“The UAE, as well as governments across the Middle East, have been doing their part by looking to further diversify and better integrate economies. So, despite the downturn in recent years, all indications show that the overall macroeconomic picture will continue improving as we move deeper into 2020 and beyond. Moreover, competition from bulk carriers and containers ships should also decline,” Ben added.

Answering a question about some of the challenges specific for this sector, he echoed that there is one major challenge which is leading to a real loss of quality in the sector; this is overcapacity.

“Bulk and container operators have been, and seem to continue facing these issues. Additionally, a strong majority of bulkers and box ships are unable to provide the logistical insight, technical knowhow, and specialist lifting and transportation which is needed to safely and consistently shift complex cargoes from one point to another.”

“A lack of experience that is needed could also be one potential factor that is preventing the successful execution of many transports.”

“On an annual basis, experts and leaders from all over the globe unite at Breakbulk Middle East to reinforce the event’s status as one of the strongest networking platforms in the industry. Moreover, the varying perspectives of these individuals offer invaluable insight into how to apply and abide by industry best practices, as well as how to develop forward-thinking solutions that enhance not only the UAE’s global maritime ranking, but ultimately the well-being of the extended region and international landscape.

“In 2019, we partnered with the WISTA Arabia–UAE (Women’s International Shipping & Trading Association) to introduce a ‘Women in Breakbulk’ initiative to align with the International Maritime Organization’s (IMO) World Theme of Empowering Women in Maritime. The addition was a great success, and due to it being highly sought out, this year we have built on the initiative by now also partnering with AWIMA (Arab Women in Maritime Association) and introducing an extension in the form of a ‘Women in Breakbulk Breakfast’ initiative. The platform will allow ambitious females in the industry to interact with other leaders and solidify their stance in the industry for the greater good of the entire sector.

“Additionally, ‘Breakbulk Masters’ is yet another initiative that provides members with an abundance of exclusive perks. We first rolled out the initiative at Breakbulk Europe, and it has now become a part of our global VIP programme.

Last but not least, we have partnered with the Arab Academy for Science, Technology & Maritime Transport (AASTS), as well as Abu Dhabi Men’s Higher Colleges to bring forth ‘Breakbulk Education Day.’ To groom the next generation of industry talent, these collaborations and workshops will provide the up-and-coming youth with invaluable knowledge, advice and guidance, so that they can confidently transition into their professional careers.” Ben concluded.

Under the patronage of His Highness Sheikh Mohammed bin Rashid Al Maktoum, Vice President and Prime Minister of the United ...

What is your vision for Egypt’s industrial sector following COVID-19, and what are ...
Newswire