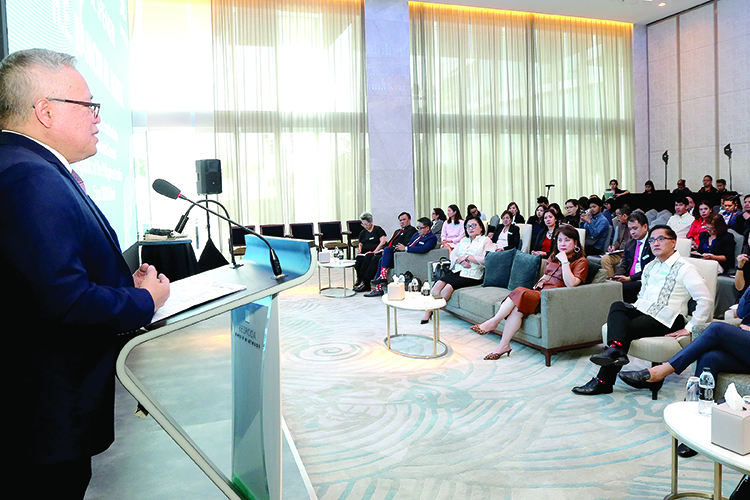 Ramon Lopez delivers his keynote address at the media launch of the ‘Bangkota’ at the Address Garden Views in Dubai on Thursday. Kamal Kassim/Gulf Today

Expo 2020 Dubai has provided the platform for the “re-setting” of the Filipino image whose DNA has historically and scientifically proven to be an “amalgamation of ethnicities” as recent as five centuries back and as ancient as 65,000 years ago.

Call it “cultural sustainability” as these people—108 million alone in the Philippines and over 12 million in almost all four corners of the world have become the “modern global Filipinos, no longer the so-called “basket case” but forward-looking, able to embrace and add on to all the necessary components for a progressive future for all.

This was from the “Bangkota (Filipino ancient word for coral reef and Philippine Pavilion theme) Media Launch on Thursday afternoon at the Address Fountain Views in Downtown Dubai.

At 11 a.m. on Thursday, a top-level delegation from Manila led by Expo2020 Dubai Philippine Pavilion Commissioner General/Philippine Trade and Industry Secretary Ramon Lopez with Ambassador to the UAE Hjayceelyn M. Quintana and Consul General to Dubai and the Northern Emirates Paul Raymund Cortes participated at the groundbreaking ceremonies of the $7-million sunscreen roof-collapsible steel-frame structure at the Sustainability Zone of the world exposition site south of Dubai.

In his keynote address, Lopez acknowledged the “wisdom of President (Rodrigo) Duterte” in deciding for the Philippine participation at the “World’s Greatest Show” from Oct. 20, 2020 to April 10, 2021.

He said at the open forum: “We should really be here participating. We should not miss the boat. We should not miss this opportunity with 190 countries (as the other participants).” The importance the Duterte Administration is giving to Expo 2020 Dubai as it would also be a win-win situation for the Philippines and the Filipinos all over the world is highlighted too not only with the One-Country Team approach of all partner government agencies, the participation of new and globally-accepted Philippine companies, and the inclusion of UAE-based individuals who have successfully penetrated their chosen areas of expertise such as internationally-recognized Ezra Santos and the Razon’s chain of restaurants which, in less than a year already has four branches across the country aside from its operations across the Philippines.

Lopez who has an extensive background in the private sector before having been asked by Duterte to join his Cabinet said entrepreneurship has long been a buzzword and a reality in the Philippines with the continuous rise of micro-small-medium enterprises.

These enterprises would definitely have their opportunities at the Expo 2020 Dubai through planned business-to-business fora.

But the pavilion on a 3,163,23 square meter land has been envisioned to be more than that.

Thus, the “Cultural Sustainability” approach as Bangkota architect-designer Royal Pineda and museum curator Marian Roces have come up with.

Pineda explained sustainability in reality is the concept of “Man is Nature” and not “Man and Nature.” “We cannot become sustainable if we take us as man separate from nature. We have to know what nature is. Filipinos have known “practical luxury” (from way back).” “Cultural Sustainability” also means re-embracing the DNA of the Filipino race, said Roces.

Within the “helix” of the present-day Filipinos are the race from Africa scientifically traced from 65,000 years ago.

From 4,000 years back, the Austronesians came from the north of what is now present-day Philippines — not from the south as taught in Philippine schools.

From this came the “172 languages not dialects” of the Filipinos including the “over 340 languages of Indonesia as from the Philippines the Austronesians went to what is now present-day Indonesia and Malaysia to as far as Madagascar and Easter Island.” These and the Philippines’ natural wonders would all be displayed for the world — including Filipinos — to see and understand through sculptures, visual/digital arts at the Bangkota.

Domus Group, in partnership with the Dubai Sports Council (DSC), has announced the launch of Dubai International Heritage Sports Exhibition ...

Safe Dynamics has announced the opening of its international headquarters in ...
Newswire

UAE – The Abu Dhabi Police on Thursday reminded motorists not to use ...
Newswire

Is Pak planning to gift Sindh islands to China through PIDA ordinance? newkerala.com#181891