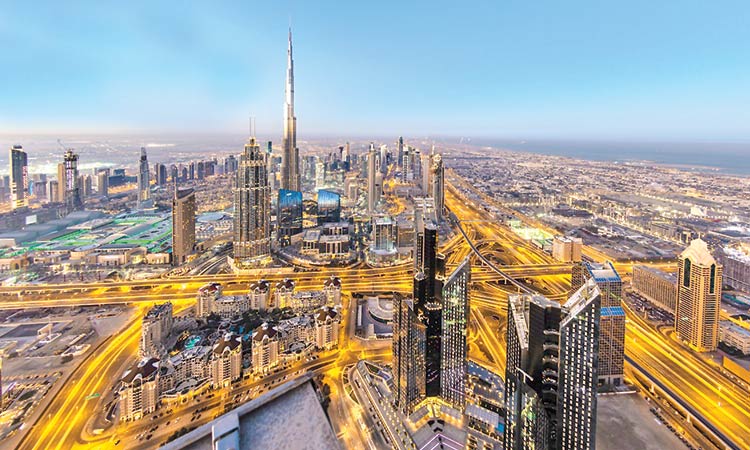 A stupendous view of Dubai. The shift of Dubai Expo to 2021 is expected to fuel growth and stimulate foreign investment.

The UAE ranks 19th globally in the 2020 Kearney Foreign Direct Investment (FDI) Confidence Index, up from 21st place when it was last represented in the index in 2017.

The country’s ranking reflects positive investor sentiment based on the government’s strong commitment to economic diversification, innovation, infrastructure and ease of doing business – among other factors.

Positive government policies introduced in 2019, such as introduction of 100 percent foreign ownership in 13 sectors of the economy—including manufacturing, agriculture, and renewable energy, as well as strong activity in the technology sector following the United States’ ride-sharing firm Uber Technologies Inc. acquiring the online car booking service Careem Networks for $3.1 billion, have contributed to making the country one of the world’s most attractive FDI destinations.

According the FDI Confidence Index, global foreign direct investment will decline in the year ahead as a result of COVID-19 and the nature and timeline of recovery remain highly uncertain. However, commenting on the UAE’s ranking, Rudolph Lohmeyer, Partner, National Transformations Institute, Kearney Middle East, said: “The UAE’s commitment to good governance, innovation, infrastructure and the business environment is now paying clear dividends in its foreign investment attractiveness.

Investors clearly anticipate that these fundamentals combined with an extremely effective response to the crisis will enable the country to emerge strongly from the COVID-19 crisis. The UAE is also expected to benefit from the entry into force of the Africa Continental Free Trade Area (AfCFTA) through new trade opportunities with African countries, though COVID-19 has delayed the timeline for the agreement.”

“The shift of the Dubai Expo 2021 is expected to fuel growth and stimulate foreign investment as the world emerges from the crisis,” he added.

The survey was in the field as COVID-19 was starting its spread across the globe, with market shocks just beginning to emerge, and it captures a moment in time in which the world was entering a great storm. At the outset of the survey period, before the spread of the virus, business leaders were reasonably bullish about the global economy and the future of direct investment. COVID-19 appeared to be contained in Asia. However, as investors realized they were “entering the storm” in the last two weeks of the survey, investor confidence predictably declined across the board—for developed, emerging, and frontier markets1 alike, mirroring the rapid outbreak of the pandemic. Between the first two weeks of the survey and the last two weeks, scores for each of these categories of markets all fell 25-33 percent.

“The pandemic and its subsequent economic shocks show just how quickly and profoundly the external operating environment can change,” says Paul A. Laudicina, founder of the FDI Confidence Index and Kearney’s Global Business Policy Council.

“Some markets will recover faster than others, and this likely explains why there appeared to be a return to the fundamentals—to large, more stable markets with more predictable political and regulatory structures. Developed markets will continue to do well this year, likely because they show strength in the factors that investors tend to prioritize, including an attractive investment environment and strong technological infrastructure.”

These preferences also explain the enduring appeal of the United States to foreign investors, which continues its longest run in the top position on the Index, dating back to 2013. The country offers a business-friendly regulatory environment, market size, and technological infrastructure.

Investors rank the availability of quality targets as the most important factor behind increasing FDI while pointing to macroeconomic stability as a top hindrance. These responses suggest that investments will likely occur in developed markets where these factors are generally stronger—and where the damage from COVID-19 is expected to be comparatively lower. Erik Peterson, managing director of the Global Business Policy Council and co-author of the study adds: “Emerging and frontier markets will suffer much more at the hands of COVID-19. A confluence of factors is at play, including inadequate medical infrastructure, limited fiscal options, a significant debt overhang, and higher levels of poverty overall.  Many of these countries struggle with limited fiscal space and economic flexibility as well as high exposure to exchange rate fluctuations, which are exacerbated by US-denominated debt levels.”

As a result, only three emerging markets rank on the Index this year: China, Brazil, and the United Arab Emirates—their lowest share in the Index, but the same as last year. And while China remains the highest-ranked emerging market on the Index—a distinction it has held consistently since 1999—this year it slipped to its lowest-ever rank in the history of the Index.

The Kearney Foreign Direct Investment Confidence Index® is an annual survey of global business executives that ranks markets that are likely to attract the most investment in the next three years. In contrast to other backward-looking data on FDI flows, the FDICI provides unique forward-looking analysis of the markets that investors intend to target for FDI in the coming years. Since the FDICI’s inception in 1998, the countries ranked on the Index have tracked closely with the top destinations for actual FDI flows in subsequent years.

On today’s update we have the latest UAE coronavirus figures, Sheikh Mohammed bin Rashid, Vice President and Ruler of Dubai, ...

Stability is returning to Dubai’s property market, with month-on-month sale transactions in June ...

How Much Fighting in a Relationship Is Too Much?